October 16, 2011 By Dacia Newton in Uncategorized Leave a comment

October 16, 2011 By Dacia Newton in Uncategorized Leave a comment

I love being home. I love being able to call up my girlfriends and go grab lunch together, I love curling up on the couch and watching football. All things I missed while I was in Uganda. I though still miss ten little hands on me all day long. I miss the children saying “Auntie Dacia” and me responding “Wanje??” and they start laughing because they know that is about as far as my Lasoga goes. I miss the long car rides to the orhpanage with a car full of little ones with eyes so big taking it all in, no matter how many times they have seen what is outside of our windows.

Yesterday I saw their little faces on the other side of the computer screen. I could barely see them because it was so dark but I could hear their sweet voices. I wanted to reach through the computer and squeeze the snot out of all of them.

We also lost a part of the Arise Africa family yesterday. Sweet Pastor Edward, who is loved by all who meet him because he exudes Jesus, lost his wife to cancer. He makes everyone laugh, he trust his Father and challenges us all to do the same, he takes care of 15 children along with pastoring caring for the people in his church. I received the phone call yesterday from Susan and I could tell as soon as she said hello something was wrong. It is moments like these when I hear that we have lost a person in the family I want to be there. When I get the phone  calls that there is a sick child I want to be there to hold them for their injections to rub their backs. But I am here and I hear Him saying, “Trust Me”.

Today as I pray for Pastor Edward and his children I am reminded of a story that reminds me that indeed I need to Trust.

It was a long day of ministry and Pastor Edward had been out in the field serving alongside the other faithful Pastors of Arise. All the other Pastors came back to the guesthouse to eat and then took local transportation to their homes, which for the most part where fairly close. I noticed that Pastor Edward was still there and it was almost 9pm. He was still smiling and telling his jokes but I could tell he was just lingering. I asked him where he lived and he told me he lived very very far. I asked just how far? He answered at least 2 hours away and he was going to have to walk because he didn’t have money for transport. This was not a hard decision or something I even had to think about because transport is not all that expensive so I just handed him a few hundred shillings to get him home. He was overly thankful but I didn’t think that I had done much, transport was something we helped with all the time. I didn’t think anything else about it.

The night that I was leaving to come back home to the States they had a little going away party for me and Pastor Edward pulled me aside and had big tears in his eyes. He told me that he wanted to thank me for something. He began to tell me that when I gave him transport to make it home that I saved his life. There are swamps that he has to travel through on foot to get home and several people are killed when they travel by foot through there at night. The night at the guesthouse he was wondering how he was going to make it home and not be killed. He said that when he returned home his sweet wife thought that he would not be returning home because she knew that he didn’t have money for transport. She had stayed up praying for his safety.

God is so near. He is in every detail and so today I remember that I don’t have to be…because He is. I can’t be there to hold the babies, to attend a funeral and hug the children of Pastor Edward, but He is there. His nearness is their good. His nearness is my good.

Please join me in praying today for this sweet servant and his children.

October 12, 2011 By Dacia Newton in Uncategorized Leave a comment

I went to bed with such a heavy heart for her because I skyped with her yesterday. She had been brought to the doctor because she was having severe back pain. She suffers from Sickle Cell and she is 7 years old. I posted a picture of her before I went to bed just asking everyone to pray that God would provide a way!

My sweet friends Ashley and Emily, both who love Uganda and are both nurses have been working so hard on getting in touch with a specialists so we can get some answers. Emily just decided this morning to email the co-director of the UNC Comprehensive Sickle Cell program. Knowing that she probably receives thousands of emails a day and no telling when she has the time to check them, we just prayed that God would make Emily’s email POP!

She received word back tonight!! The doctor helped us with what we should do for her to help reduce the pain and crisis she is experiencing frequently now. She also volunteered to monitor her blood counts monthly!

Oh, how He loves us! I just keep singing it out loud! That this doctor would take the time to sit down and write us and offer to monitor her from the U.S….He never does anything small. He goes beyond our wildest imaginations!!

Please continue to pray as we see if they offer the medicine she needs there, most likely they do not, so please pray that we find the money to buy and send the medicine.

Please join me in saying “Hallelujah, THANK YOU”! Thank you for loving us so much it hurts sometimes. You Jesus, once again have gone beyond my expectations.

I will continue to SHOUT it from the rooftops!!!

October 2, 2011 By Dacia Newton in Uncategorized Leave a comment 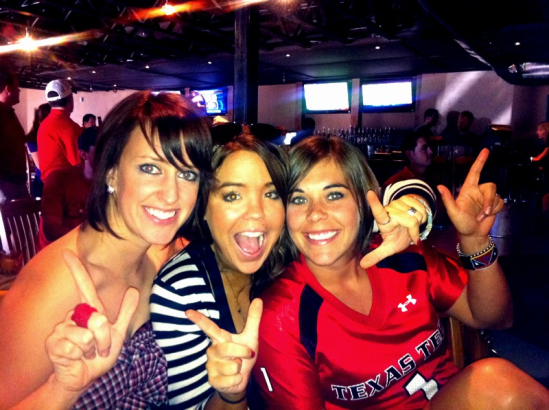 A little of home…with my great friends and Texas Tech football.

October 2, 2011 By Dacia Newton in Uncategorized Leave a comment

He loved me in my darkest.
Romans 5:8

How can you help?

If you feel led to bless Dacia, you can support her and Josh in their work in Uganda by visiting cmcmissions.org/donate. After creating an account, simply choose their name in the drop-down menu and setup your donation. Every dollar helps keep Dacia and Josh on the field and pursuing their calling.